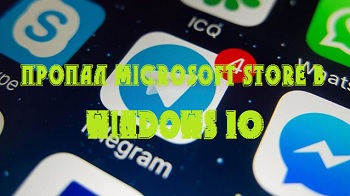 Recently, all thicket and more often PC users complain that in their systems, after various kinds of updates, all sorts of problems start to arise. For someone, such problems are not entirely critical, but someone believes that it is necessary to get rid of them as soon as possible. We will try to tell you about one of such problems and how to deal with it, since you have lost the Microsoft Store in Windows 10 and you express your desire, as soon as possible return, then you need to use the following system settings, which we will talk about as detailed below.

I want to note right away that this method of restoring the working capacity and functioning of the Microsoft Store is not a 100% panacea, because someone from insiders and ordinary PC users can help, but for someone, it will be simply unworkable. But in any case, it's worth trying, because it will not be worse!

Before you start, we suggest that you reboot the operating system Windows 10, and after that, go to the "Powershell" panel, which must be started only with Administrator rights. In an almost empty Powershell window, you should type the following command: "Get-AppXPackage * WindowsStore * -AllUsers | Foreach {Add-AppxPackage -DisableDevelopmentMode -Register "$ ($ _. InstallLocation) \ AppXManifest.xml"} ", then click on" Enter ". The execution of the command does not take long and once it is finished, you must reboot the operating system in order for the changes to take effect.

Thus, if you lost the Microsoft Store in Windows 10, then you have all the chances to get it back and you will not have to wait for the next update. But if so, it turns out that the Store will not work, then the most adequate way will be to wait for the next system update, which will fix everything and put it in its place.

Of course, there is still the possibility to roll back the system to the previous version of the update, but as you understand, this is a completely different story...