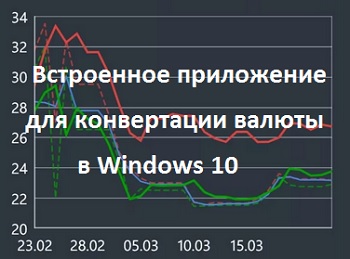 Until recently, many PC users came up with the idea that: "It would not be bad if they had a built-in application for currency conversion in Windows 10. But, unfortunately, Microsoft was not in a hurry to implement this idea in a full-fledged software. A very short time has passed, a lot has changed, the society began to closely monitor what is happening in the world and as a result, there was an even greater need for a unique application that could be located on a computer so that the user did not constantly go to the Internet and did not use Additional software that allows you to monitor exchange rates. The new software, which is considered preinstalled, appeared in the OS along with the release of the update of Windows 10 Fall Creators Update, but few PC users know about its capabilities and for that reason, they practically do not use it, although, in fact, work with it very conveniently.

To activate the application monitoring exchange rates, you must activate the long-known application "Calculator". Now, you need to open the "main menu" of this application (you can do this with just one click on the "≡" icon). A new window has opened, where there are several different items, but you should be interested only in the one that is called "Convert". If everything is correctly done, then there will be an "additional menu" in which there will be a "Currency" item, according to which, in fact, one more click should be made. 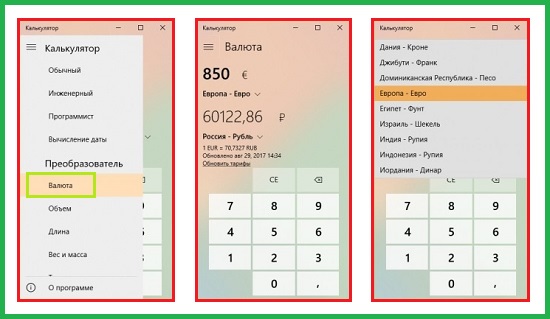 If you are not satisfied with the set default currency values, you can always replace them with the currencies you need at the moment of monitoring.

Immediately, there is an additional information field that will allow you to personally track some changes in the course, namely: the time of the last update of courses, the courses themselves in real time and so on.

The application is modeled so that every few minutes, it updates statistics on its own and provides the user with updated information about exchange rates. But it happens that the user does not want to wait for a system update, in this case, he can use the button "Update Rates", which in a few seconds, everything will update and provide completely new data for the courses.

Actually, that's how the built-in application for currency conversion in Windows 10 works and honestly, this software can be considered very successful and most importantly, it is quite an important solution for performing certain tasks. Now, the need for constant - self-monitoring currency exchange rates disappears and you have additional time to perform other work tasks.